The morning of Glenview’s inaugural Blocktoberfest started dark and gloomy, but by the end of the night Saturday, Sept. 28, it was clear nothing was going to stop the party on Glenview Road.

More than 5,000 people from Glenview and around the North Shore descended on downtown Glenview for the Village’s first-ever Blocktoberfest, according to Brian Schafer, an event organizer and co-owner of Ten Ninety Brewing Co. The event featured food and drinks from Glenview businesses, including Spiro’s Deli, Forza Meats and Ten Ninety Brewing Co., as well as performances by local bands.

“I can’t stop smiling,” said Morning Glory Flower Shop owner Bob Hausheer, who organized the Village’s first Blocktoberfest with Schafer and a number of organizations in Glenview. “It exceeded our expectations beyond what we could’ve even imagined.”

People of all ages came out in droves to check out the event, which was “just absolutely fantastic,” Hausheer said.

The turnout for the street festival “was outstanding, and Glenview should be proud of themselves” for putting on the event and making it such a success, Hausheer said.

There are “no guarantees” for another Blocktoberfest next year due to the amount of planning that is required, Hausheer said, “but gosh darn it, I can’t see any reason why we wouldn’t want to continue … for years and years to come.”

Hausheer said he saw how packed Glenview Road was while making some announcements from the stage ahead of Tributosaurus transforming into The Rolling Stones, and it was immediately clear to Blocktoberfest’s organizers “that we successfully fulfilled our mission of creating a signature event for now and for thefuture.”

“This was a culmination of a great body of groups coming together — with the merchants of downtown Glenview, the Friends of Downtown Glenview, the Chamber of Commerce — all working together to make this event work,” Hausheer said, while also thanking the Village of Glenview and its police, fire and public works departments for their “tremendous support.” 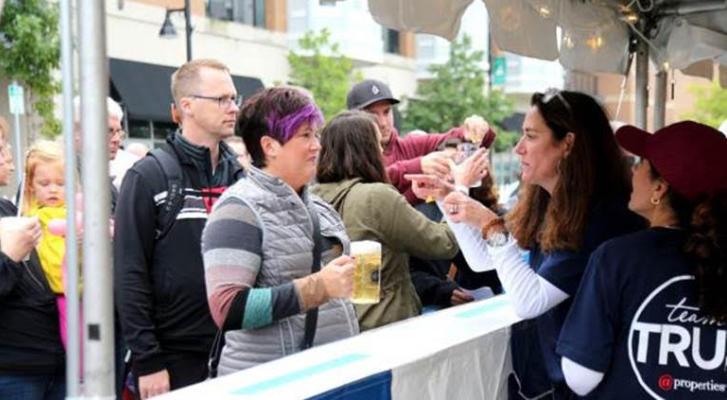